How will Covid-19 impact your digital marketing plans? Learn More... 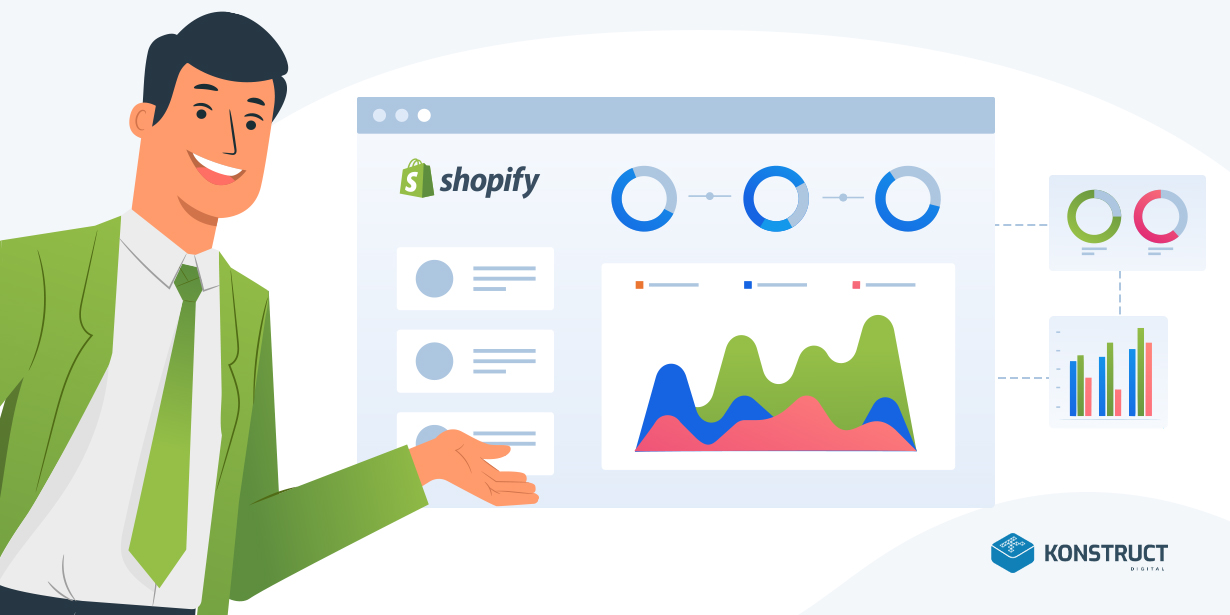 If you shop online, have an online store, or have dabbled with eCommerce, you’ll either have used or heard about Shopify.

ECommerce is rapidly growing in popularity and is projected to keep growing. The 2020 COVID-19 outbreak only highlighted the flexibility and convenience of eCommerce as quarantined and self-isolating shoppers around the world kept consuming from the safety of their homes. Now that businesses are increasingly moving to a digital selling approach and more consumers are flocking to online stores rather than brick and mortar stores, Shopify is ubiquitous.

As a Shopify Partner, the team here at Konstruct has years of experience working with eCommerce stores of all kinds, including Shopify. Over the years, we’ve kept an eye on how Shopify is developing.

For such an important player in the eCommerce realm, we thought it would be worthwhile to round up some interesting Shopify facts and key Shopify statistics. Show, don’t tell, right?!

Shopify is a Canadian eCommerce platform and solution. With its user-friendly interface, Shopify significantly lowered the bar of entry for entrepreneurs and existing business owners who wanted to start an eCommerce store.

However, the co-founder of Shopify didn’t set out to create one of the leading eCommerce platforms. In 2004, Tobias Lütke and his business partner were looking to start an eCommerce store for their snowboard company. Lütke found the existing eCommerce tools available so underwhelming and frustrating to work with that he decided to put his skills as a software developer to use and build his own eCommerce platform.

Soon, the demand for the eCommerce platform surpassed the demand for snowboard gear and Shopify as we know it today was founded in 2006. Well, sort of. At its inception, Jaded Pixel, as the company was named back then, only offered customizable eCommerce store builder templates. Today, Shopify provides a full solution with payment, shipping, distribution, along with mobile and social selling options.

As a company, Shopify has seen incredible growth over the years. Let’s have a look at some current Shopify data to get a sense of the size of the company.

Next up, let’s have a look at some stats about the Shopify stores. If you’re considering starting an eCommerce store, you’d probably want to know how much the average Shopify store makes and how many people use Shopify.

Because of the diversity of businesses that use Shopify, it can be difficult to give a definitive answer. Case in point, Shopify powers eCommerce for large brands such as Hasbro, The Economist, Heinz, Penguin Books, Budweiser, BBC, Red Bull, and many more.

Rest assured, though, we have rounded up answers to all of your burning questions!

Who are Shopify Merchants?

One of the most common questions about Shopify is: can Shopify make your rich? This question is closely followed by: can dropshipping make you rich? So, let’s look into dropshipping for a minute. Unlike a traditional eCommerce store where a merchant either sells goods they’ve made or have in inventory, dropshipping requires no initial investment to buy inventory. Instead, the merchant buys items from a third-party that ships directly to the customer. With dropshipping, the merchants never actually handle the stuff they sell!

The low initial cost and convenience have made dropshipping a popular online retail model. Shopify has dropshipping down to a tee and offers automated dropshipping services. While there are no Shopify-specific data available, many dropshippers use Shopify because the platform caters to this distribution model. Across the board, 27% of all eCommerce stores have adopted dropshipping. (eCommerce Platforms)

With such a wide variety of stores and merchants around the world, Shopify has been able to glean some really interesting insights about country-specific differences among shoppers.

What sells best on Shopify? Although there are some universal, top-selling products, interestingly, the top-selling products on Shopify also vary a lot from country to country. In their 2019 State of eCommerce report, Shopify shares some data on the top sellers worldwide and in specific countries.

Will Shopify continue to grow? If Shopify’s growth follows the projected growth trajectory of global eCommerce, then, yes!

At this point, it shouldn’t be surprising that more consumers are expected to make use of eCommerce shopping options. What is mind-blowing, though, is the increasing influence online shopping has on in-store shopping and the value eCommerce options represent. If you want to know more about how our digital and physical lives increasingly blend, check out this blog post.

Not Happy with Your Shopify Store Statistics?

If you are struggling with driving growth and marketing your Shopify store, you’re not alone!

Here are a last couple of stats for you: in a merchant survey, Shopify found that marketing continues to be the biggest challenge for their merchants. 30% of Shopify merchants say that marketing is one of their main challenges, closely followed by 22% who say they are struggling with building a brand.

As an entrepreneur or business owner, it can be tempting to try and do everything yourself. We get it – it can be difficult to trust your brand in someone else’s hands and that an investment in marketing will pay off on your bottom line.

At Konstruct, we’re committed to delivering results for all shapes and sizes of Shopify businesses. Check out our Shopify marketing services here. You can also cut right to the chase and contact us for a free consultation!

With a background in communications, Katrine focuses on content creation and harnessing the power of words towards a digital marketing strategy. She is on an ongoing mission to learn more about how to engage an audience via text and keeps a keen eye on emerging trends in digital marketing. The COVID Chronicles Part 1: Roundup of the Most Creative Digital Pivots